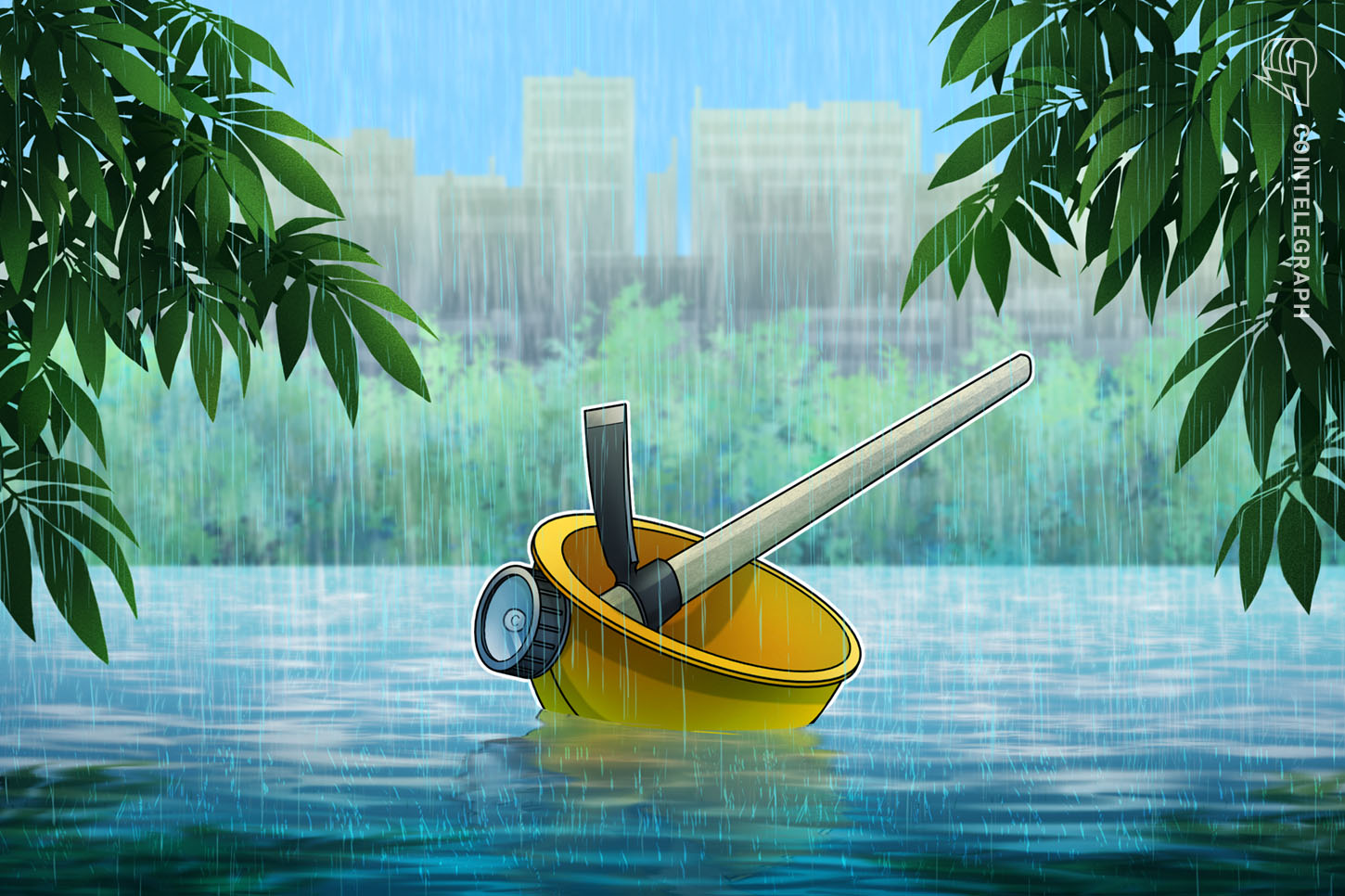 The post-halving reality of Bitcoin’s network may soon change shape, some industry insiders argue. The reason is quite simple, and, surprisingly, it has nothing to do with crypto itself: The wet season has arrived in Sichuan, a southwest China province known as one of the hottest spots for Bitcoin (BTC) mining.

The rain in Sichuan is a good sign for all local farmers, Bitcoin miners included. The abundance of water leads to a hydropower supply glut, which, in turn, makes electricity prices — miners’ main burden — decrease. As a result, mining becomes increasingly profitable, which can lead to an increase in the overall hash rate. But is it possible for a single Chinese province to drive up the entire Bitcoin network amid slashed rewards?

The go-to place for mining

According to the latest data from the Cambridge University’s Centre for Alternative Finance’s Bitcoin Mining Map, Sichuan accounts for 9.66% of the total BTC hash rate. It is worth noting that the southwest province is not even currently the main mining spot in China, trailing Xinjiang, the desert region which represents as much as 35.76% of the global Bitcoin hash rate.

However, the distribution of hash power within China changes every year between May and October when the wet season begins in Sichuan. Local players then begin to migrate en masse from Xinjiang, Inner Mongolia to Sichuan and Yunnan to take advantage of the lower electricity rate. Leo Zhang, the founder of Anicca research, told Cointelegraph:

“Over the years, the mining industry started to organize itself around this schedule. Manufacturers do their product announcements in May. Facilities offer their special deals right before the rainy season begins.”

It all comes down to Sichuan’s intensive hydroelectricity sector. In 2019, the province reportedly produced 78.2 gigawatts and exported 104 billion kilowatt-hours, which constitutes around 30% of its total output, to other domestic regions. According to the Chinese mainstream press, the ample hydropower energy during the rainy season, as well as the cool climate in its mountainous areas, has made Sichuan “an ideal destination for miners.”

This year’s wet season in Sichuan arrived later than usual, as most of its areas entered the rainy season only around May 25. The delay has reportedly affected the local mining sector. According to a local crypto news outlet, some Bitcoin mining farms in Sichuan switched off earlier this month against the backdrop of electricity shortages.

The report cited a government notice issued on May 18, which stated that the electricity load within the region has increased by 22% since the start of May, while water flow in local rivers had decreased by 20%, resulting in a shortfall in hydroelectricity supply. According to the report, an unidentified local miner said that some of the local mines stayed blacked out for over three days, while others were only allowed to mine during the night.

This year’s rainy season is more complicated than in the past since the halving comes into play as well, Zhang told Cointelegraph. According to him, mining operations in southwest China are still slowly recovering:

“After the halving, as even more machines left the network, the facilities were in desperate need to fill the capacity. So far, the supply of hosting facilities greatly outweighs demand. Many facilities in Sichuan and Yunnan areas are having trouble finding clients. The oversupply of flood season hosting facilities further reduces average electricity prices. Compared to last year’s 0.24–0.26 RMB/kWh all-in cost, this year’s average can be as low as 0.10–0.20 RMB/kWh.”

The impact from the block reward halving will be partially absorbed by the lower cost of power, Zhang went on to add, outlining the current trends among Sichuan Bitcoin miners that many of the facilities have contracts with power plants outlining a minimum level of electricity usage. He added: “In order to attract business, some of them are offering ‘joint-mining’ programs, where the miners pay de minimis monthly cost and split the mining revenue with the facility owner.”

Pankaj Balani, the CEO and a co-founder of crypto derivatives platform Delta Exchange, shared a similar sentiment in an email sent to Cointelegraph, arguing that the wet season can even be dangerous for the local mining sector: “Whilst there are clear efficiency gains to be made regarding electricity costs for miners, complications can also arise, including flooding and the destruction of mining infrastructure.”

In 2019, the Bitcoin hash rate rose from 48 million to 90 million terahashes per second between May and September, with comparable rate gains experienced in 2018. This time, however, there might be different results according to Balani: “The recent halving plays a role here and it remains to be seen whether the observed rainy-season hash rate increase can be sustained in a low-revenue period such as this.”

Overall, the mining sector in China has been experiencing problems in recent weeks with the combination of COVID-19-related restrictions, slashed revenues and price volatility; for example, Canaan, one of the main China-based mining players, recently reported a $5.8-million Q1 loss and cut the price of mining hardware sold by up to 50%.

Ian Descoteaux, the head of mining at Bitcoin.com, does not think there will be an increase in the hash rate “considering we are not even settled yet after the halving” either, but, in his view, the rainy season will at least help to prevent further drops in Bitcoin’s hash rate. Meanwhile, some experts are much more positive about this year’s wet season. Kristy-Leigh Minehan, a consultant and the former CTO of Genesis Mining told Cointelegraph that she is expecting a surge:

The mining market is currently in the bear phase, and margins “are thinner than ever,” according to Matt D’Souza, the CEO of Blockware Solutions, a mining hardware broker, told Cointelegraph, who added that in order to break that trend, more inefficient miners will have to quit the game, or alternatively, Bitcoin’s price needs to move up.

The quitters are being replaced by the next generation of mining devices like MicroBT’s M30 series and Bitmain’s Antminer S19 machines. Those units are capable of producing up to 100–120 TH/s, thereby mitigating the increased mining difficulty. Some of them have already been shipped out in limited quantities but have yet to become widespread among miners. Descoteaux told Cointelegraph:

“We will see a significant increase in hash rate when the S19 from Bitmain finally ships during the summer. The S19 is a significant improvement over even the S17. So, while miners are not really deploying more power, the overall efficiency gain of the network will result in greater net hash rate number.”

According to D’Souza, Chinese miners have been “aggressively” upgrading to the next generation equipment. “It is why they [new devices] are sold out through September.” He also believes that the start of the rainy season will increase the hash rate, but it is nonetheless unlikely to cause a massive spike.

Many farms had been switching over to newer ASICs months in advance, Minehan confirmed, although the coronavirus, shipping delays and material delays “caused a bit of a backlog.” According to her, “June, April and September will be the next upgrade periods. So, we can expect to see ‘increases’ in the net hash in those months.” She added: “Many of the Chinese miners are old hats — meaning this isn’t their first halving — and they have just been planning deployments accordingly.”