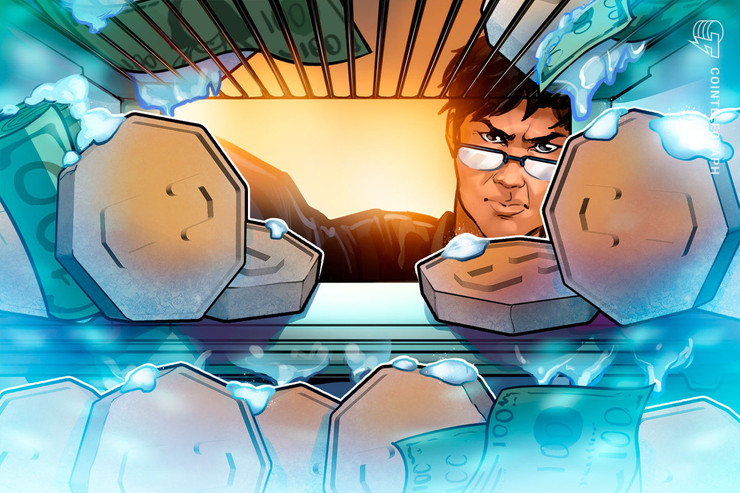 On Feb. 11, ePayments Systems Ltd, a United Kingdom-regulated electronic money institution, suspended all online payment activity at the request of the Financial Conduct Authority, the local regulator. Upon “agreeing” with the watchdog, ePayments froze all of its customers’ accounts, blocked their prepaid cards, and banned new account openings “until remedial action has been undertaken to the satisfaction of the FCA.”

According to the customer notice published shortly after the incident, the decision to halt business was made after a regulatory review of the company’s Anti-Money Laundering systems. During the inspection, the FCA reportedly identified “a number of weaknesses which require urgent remediation to ensure that customers can enjoy a safe and secure platform.”

While the company reassures its customers that their funds are safe, it fails to explain when they will get access to their accounts back. Reasons for the intensified scrutiny are also unknown, although experts suggest that recently announced crypto regulations are not the case.

EPayments is closely affiliated with a cryptocurrency exchange

EPayments.com first went live in 2012, while the company itself was founded in 2010 by Mike Rymanov, a London-based entrepreneur of Russian descent. Its target audience comprises “webmasters, freelancers, affiliate programmes and advertising networks,” wishing to carry out instant transfers to one another via bank transfers, prepaid cards and other payment methods.

Since July 2014, ePayments has been certified as an “Authorised Electronic Money Institution” by the FCA, meaning that the watchdog has given it permission to issue electronic money and provide payment services.

The license reportedly allowed ePayments to become a MasterCard partner in late 2016 and to collaborate with a number of Russian e-payment providers, namely Yandex, Qiwi and WebMoney.

In 2014, Rymanov founded Digital Securities Exchange (DSX), an exchange “tailored for digital currencies.” It is a “partner business,” meaning that all DSX customers are “required to go through ePayments on-boarding process, in terms of identity verification.” Rymanov remains the CEO of both ePayments and DSX, while the companies also share the same address in London. DSX allows clients to withdraw funds via an ePayment wallet free of charge.

According to Rymanov, DSX was “the first company in the U.K. and Europe to provide a regulated environment to trade digital currencies.” Similarly, DSX’s initial press releases argued that the exchange had “forced Bitcoin into the regulatory environment.”

That claim has since been questioned by a Financial Times reporter who noted that DSX acts as an appointed representative of ePayments Systems Ltd per the FCA register, which, by extension, allows it to issue e-money and provide payment services. “Such business is some way from, say, a regulated broker dealer offering to trade in the Bitcoin market,” the FT correspondent argued.

According to the DSX official website, 20% of all transactions on ePayments involve crypto, while as many as 1 million ePayments customers allegedly “have a safe, reliable way to handle crypto,” thereby confirming the connection between the two. Notably, ePayments has recently edited out the mention of a total number of users from its website — as of Dec. 24, 2019, the company claimed to have 847,375 customers enrolled with the platform, which suggests that ePayments registered the remaining 150,000 customers in just over a month and a half.

Some social media commentators have questioned those numbers in the wake of the FCA incident. “It amazes me, two days since ‘one million’ accounts went frozen, and [the internet] is silent,” one of the allegedly affected users wrote, referring to the lack of financial mainstream media coverage and stressing that ePayments has just over 2 thousand subscribers on Twitter:

“They have only few thousand followers on Twitter. Makes me think that [the] majority of those accounts were not real.”

A spokesperson from the Financial Ombudsman, an entity that helps to settle disputes between consumers and U.K.-based businesses providing financial services, told Cointelegraph that they received “less than 10” inquiries cases against ePayments, although none of these cases are related to the suspension of the accounts. The representative added:

“If consumers are unhappy with their provider, they should get in contact with the Financial Ombudsman Service, and we’ll see if we can help.”

Additionally, ePayments has removed the “Our Team” tab from its website. As of Dec. 24, it stated that “above ePayments, is our team of the best specialists in the financial industry.” However, four photos of Rymanov and three other executives are still up on the website under the “About” tab. The “Our Team” tab, meanwhile, is still missing. According to the page source, it was last modified on Feb. 15 after the FCA incident.

DSX was also facing issues, apparently now back to normal

On Feb. 12, the next day after ePayments had frozen all accounts, its partner business DSX announced that all transfers between DSX and ePayments will be temporarily suspended, while the ePayments customers who wish to continue exchanging crypto can still register at DSX through their ePayments accounts. On Feb. 13, DSX clarified that they were “facing some issues” with their banking suppliers due to the ePayments situation:

“We are temporarily unable to accept bank deposits or process bank withdrawals. We are already working hard with the bank to fix the issue and start processing bank transfers again.”

The next day, the exchange declared that bank deposits were back because the platform had allegedly established a new banking partnership. While it is unclear what bank now handles DSX transfers, prior to the FCA incident, both DSX and ePayments collaborated with the same Latvian bank called Rietumu Banka.

According to Twitter commentators and data provided by CoinGecko, most cryptocurrencies on DSX have been trading for a 10–20% premium since the ePayments suspension, supposedly due to the increased amount of customers wishing to withdraw their funds from the ePayments-affiliated platform. Cointelegraph has asked DSX to comment on this but has yet to receive a response.

EPayments claims to have made “good headway,” accounts remain suspended

As of press time, ePayments has ignored several requests to comment sent by Cointelegraph over the past few days. Nonetheless, on Friday, the platform released an FAQ on what it calls a “temporary” account suspension. In it, the company stated that it cannot provide a concrete timeframe on when the customers are expected to get their accounts back but reassured that “all of your funds are safeguarded as normal and are not affected by the work we are currently undertaking.” In addition, ePayments noted that its FCA license is not being revoked.

The FCA spokesperson told Cointelegraph that the agency doesn’t comment on individual firms. When asked whether ePayments had time to warn their customers before suspending their accounts, the representative said:

“As part of the voluntary requirements, and the notice on the FCA register, the firm ceased its business activities with immediate effect. This includes the suspension of accounts. Consumer funds being safeguarded are normal, and funds can be retrieved once the firm’s improvement process has been completed.”

George Basiladze, co-founder of wallet and payment platform Cryptopay, suggests that ePayments might be facing scrutiny due to insufficient KYC procedures:

“In their statement, they [the FCA] have cited deficiencies in the Anti-Money Laundering systems. That could mean poor Know Your Customer controls and/or monitoring of transactions.”

While the FCA has been appointed to monitor AML and counter-terrorist financing for companies carrying out cryptocurrency-related activities since the start of 2020, Cal Evans, founder of compliance and strategy firm Gresham International, told Cointelegraph that “it is highly doubtful that this has anything to truly do with the new FCA rules.” He added:

“The new FCA rules give companies until 2021 to register and suggest that applications are made by July 2020 in order to meet the deadline. There is nothing in their business model that would currently have to change, let alone anything which would require them to start freezing accounts.”

Similarly, both experts opined that the new AMLD5 regulation was most likely not the case, either. Evans told Cointelegraph: “New AMLD5 laws could have an impact, but nothing some simple company changes/onboarding process would change. Suspending everything is a major overreaction.” Basiladze expanded on that, arguing that the actual impact of AMLD5 won’t be seen until 2021, and, in the meantime, the guides have not been published:

“It’s the early days of regulation, and all the operating businesses have at least one year to get ready. We can only see the effect of AMLD5 in 2021. Also, we shouldn’t forget that AMLD5 is not solely about crypto business, it is about prepaid cards, brokers, e-money, well, lots of stuff besides that. So, we can assume that the current case is not connected to this directive and crypto stuff and is related to some other part of the business that falls under the scope of the licenses that they already have.”

While ePayments continues to keep its customers in the dark by not giving at least an approximate timeline for account reactivation, Basiladze suggests that it could be a lengthy process:

“The current accounts’ freeze may be reverted after the issues have been addressed and the regulator is satisfied with the outcome. That may take time, though, as development of KYC is time-consuming and may take months. Even when everything’s ready technically, FCA will go through the issues again, so it’s paperwork too.”

Nevertheless, it seems like ePayments has been collaborating with the FCA. On Monday, the company announced that it had made “good headway,” and added more questions to the aforementioned FAQ. Per one of the new points, ePayments asks all customers who are called or emailed by someone claiming to be from ePayments or the FCA to “please end the call / do not reply to the email and contact us directly.”