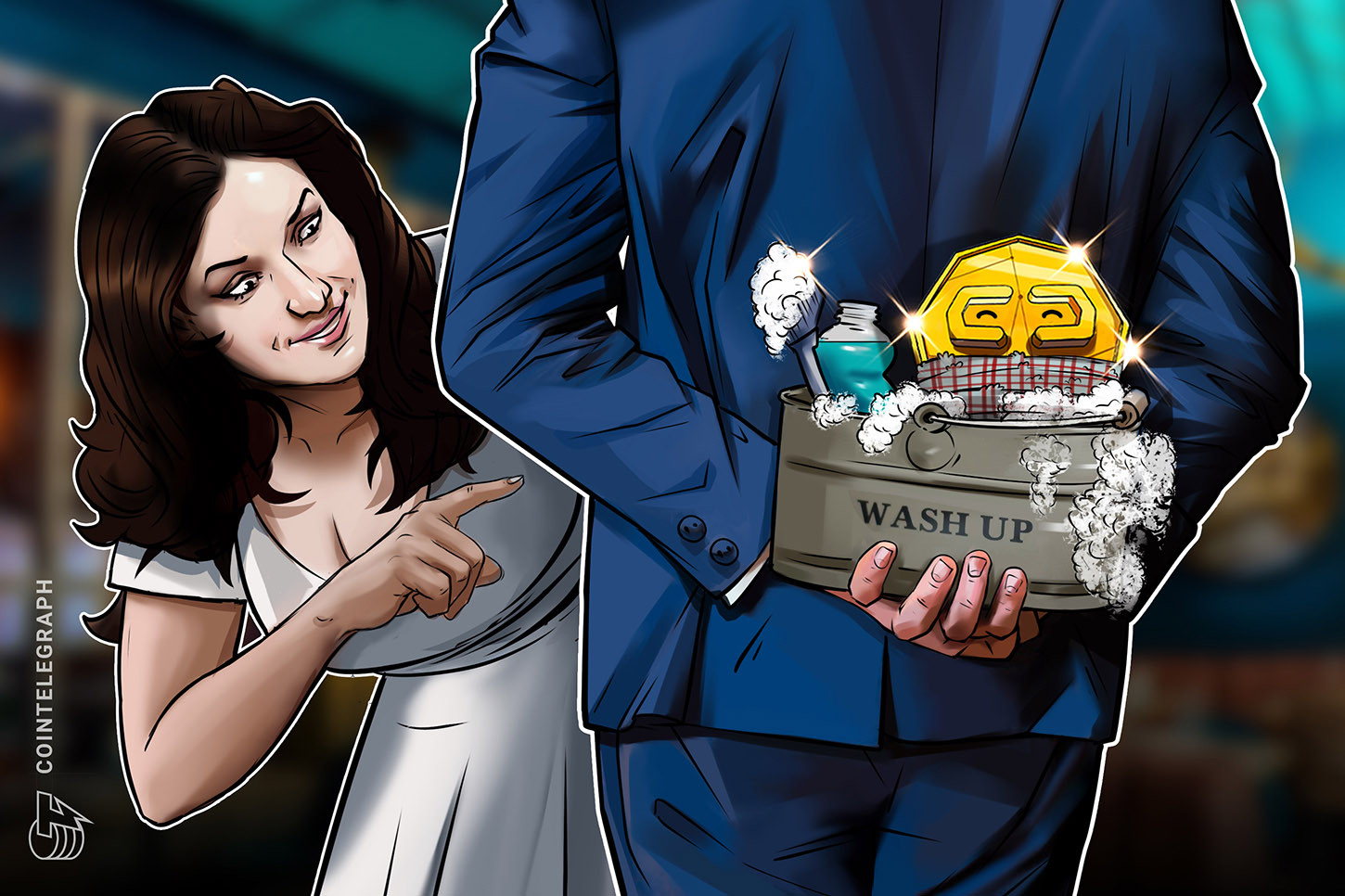 When Bitwise Asset Management declared in a March 2019 presentation to the United States Securities and Exchange Commission that 95% of the Bitcoin (BTC) trading volume being reported globally on cryptocurrency exchanges was “fake,” it jolted rating firms, exchanges and the larger crypto world. Data analytics firms recalibrated their exchange ranking metrics, and some assumed it was just a matter of time before wash trading was curtailed if not eliminated.

But wash trading was back in the news last week when the CEO, president and chief operating officer of Canadian crypto exchange Coinsquare were all forced to step down after Ontario securities regulators accused the company of inflating trading volume to the tune of $5.5 billion.

Wash trading involves transactions in which no funds or financial interests are actually exchanged. They are sometimes referred to as “false trades” and are used to bolster an exchange’s reported trade volume. This, in turn, gives the appearance of liquidity and market activity, attracting new users to the exchange. In traditional finance where exchanges are regulated, trade volume is a good proxy for liquidity — but not in the crypto world.

Bobby Ong, co-founder and chief operating officer of crypto ratings platform CoinGecko, told Cointelegraph: “This problem is still prevalent. We still see non-regulated exchanges conducting wash trading, and we don’t have a good measure to tell whether it is getting better or worse over time.”

Meanwhile, John Jefferies, chief financial analyst at crypto forensics firm CipherTrace, informed Cointelegraph: “The Bitwise letter to the SEC was a turning point because it informed investors and regulators on how pervasive wash trading was at that time.” But it didn’t stamp out the practice. “This form of market manipulation is still a serious problem, especially in the 800 exchanges that are not in the Top 40.”

Bitwise’s chief technology officer, Hong Kim, told Cointelegraph that he has seen no uptick in wash trading lately, and since Bitwise made its presentation to the SEC in an attempt to win approval for a Bitcoin exchange-traded fund, or ETF, “enormous progress has been sustained” in dealing with the problem of fake trading numbers — but more work still needs to be done.

Wash trading has even been reported recently on decentralized exchanges, which seems like an anomaly because each trade is recorded on a public ledger and fake trading may be easily detected. It seems that the practice may sometimes take place on Binance DEX and Loopring, showcasing that DEXs can also be affected.

“Simply put, there is no easy way to tell if an exchange is inflating volumes or not by merely looking at the volumes they report. The only way to truly detect ’wash trades’ would require access to ’account-ID’ data — the actual accounts that performed the trade — and this data is extremely sensitive; only exchanges have access to this.”

Wash trading is sometimes characterized as a victimless crime, but the practice can mislead investors. Charles Hayter, founder and CEO of CryptoCompare, told Cointelegraph: “Ultimately it is the consumer who is harmed by it as it is a false representation of depth in the market.”

Investors often feel more comfortable trading on a larger exchange, and the trading volume on a platform “is a factor that a reasonable investor would consider relevant in deciding whether to enter into or maintain a trading relationship,” noted the Ontario Securities Commission in its “statement of allegations” against Coinsquare.

Trading in these markets is a zero-sum game, added Jefferies. “Some unlucky speculator is going to lose the money that the market manipulators gain.” Moreover, Jefferies believes that “the industry as a whole suffers from lack of trust,” which impedes crypto’s growth into a major asset class, given concerns about market manipulation. No crypto-based ETF application has won SEC approval, and wash trading may be partly to blame for that, he suggested.

Wash trading is most prevalent among smaller, newer exchanges looking for a way “to trick new users who may not know who are the most reputable exchanges into opening an account with them,” said Ong, but often at unfavorable rates with high slippage. These exchanges are more likely to be hacked, too, because they often lack the resources to invest in the best cybersecurity practices.

Fake volume is generally created in two ways, explained Kim. Exchanges can be directly involved, just printing numbers or paying someone to trade. But perhaps more common, an exchange can create incentives for users to trade with themselves. The exchange could create a “no fee” top tier for users who trade more than $1 million in a year, for instance. Traders who want to maintain their no-fee top-tier status can do this simply by trading with themselves — at no cost. “The exchange doesn’t have to intentionally create fake volume,” said Kim.

Still, some headway has been made since “Bitwise’s herculean study into trading volume manipulation helped pierce the veil on legitimate vs. spoofed order books,” wrote Messari CEO Ryan Selkis in a May blog. For example, the Bitwise report further encouraged Messari to develop a new set of trading volume metrics — its “Real 10 Volumes” — based on 10 exchanges it believed to have reported “legitimate” crypto trading volumes via their APIs.

Other ratings firms made adjustments in their exchange rankings, including CoinMarketCap, which Bitwise called out specifically by name in its 2019 report, stating: “Despite its widespread use, the CoinMarketCap.com data is wrong […] giving a fundamentally mistaken impression of the true size and nature of the bitcoin Market.”

Chee told Cointelegraph that “we do not disagree with the findings of Bitwise. We still think a large proportion of volumes are not organic in nature,” although he was reluctant to put an actual figure on false reporting, given the lack of objective data. But when CoinMarkeCap unveiled a new exchange ranking methodology that shifted from volumes to a mixed system of web traffic, liquidity and volumes, it saw a more than 50% drop in the globally reported volumes of exchanges. In 10-plus exchanges, the reduction in reported trading volume exceeded 90%. “This is indicative of prior wash trading, as exchanges are no longer incentivized to inflate volumes,” explained Chee.

When CryptoCompare revamped its crypto exchange benchmark, it gave considerable weight to jurisdiction — i.e., if the exchange is domiciled in a regulated environment. A regulated jurisdiction suggests the exchange is going to do things by the book, Hayter told Cointelegraph. Other factors such as website traffic — used by CoinMarketCap and others — are less useful in determining the authenticity of trading volume, according to Hayter, who went on to add:

“Website traffic, although sometimes useful for gauging popularity, is not really accurate — as lots of exchanges trade via API which will not be accurately represented. Coupled with that exchanges with high web traffic tend to be using populist promotions which in the long run tend to be empty promises.”

Some view wash trading as a problem caused by having so many unregulated exchanges, as they “have a much higher instance of wash trading,” said Jefferies. “Until recently this included Canada, where Coinsquare was accused of wash trading 590,000 BTC, and the CEO, President, and the COO were forced out.” CoinGecko’s Ong told Cointelegraph:

“Unfortunately, many of the unregulated exchanges, especially those coming from China, are heavily wash trading and faking their volume. They have trading bots running to boost volume to appear larger and more liquid than what they actually are.”

This is apparent from situations where the bid-ask spreads are huge — more than 50% — but trades of more than $100 million are still reportedly taking place between the bid-ask spread, Ong added. “We have also seen exchange websites going down but API still spewing high trading volume data.” By contrast, exchanges in regulated jurisdictions are not facing these issues. Chee agreed: “Jurisdictions like the USA, Europe, Gibraltar, Japan, among others, generally have licensed exchanges that are more compliant to laws against market malpractice,” including wash trading.

What about exchanges with “some” inflated volume?

Ratings firms have been reluctant to eliminate all non-regulated exchanges from their rankings, however. When Messari went with only the top 10 “clean” exchanges, it found that it eliminated a large part of the market. Specifically, it removed exchanges with some inflated volume but also legitimate trading volume — companies such as Bithumb, Upbit and Coinone in South Korea; Liquid in Japan; and Huobi, OKEx, OKCoin and Gate.io in China, said Selkis.

Messari eventually added 10 more exchanges to its “real volume” metric, but it applied a 50% “haircut” to those gray-volume Korean and Chinese exchanges to better approximate their true volumes. According to Selkis, “We believe this better reflects the magnitude of adjustment necessary vs. simple web traffic comparisons, which usually discount these volumes by approximately 90%.”

Bitwise’s Kim, however, is wary about discounting — i.e., applying “haircuts” to — exchanges with inflated trading volume. In an unregulated jurisdiction, an exchange can report anything it wants with impunity. It can create a trading volume number out of thin air. Applying a 50% haircut to this number could still leave the exchange with $1 trillion in reported trading. So, the exchange’s “big lie” strategy remains alive and well.

On the other hand, if exchanges offered proof of reserves, “Wash trading would go away altogether,” said Kim. Kraken and a few others have done something like this. “It’s a doable thing, but the community isn’t demanding it.”

Global regulation may be the long-term answer, but in the medium term, market surveillance and virtual asset service providers giving transparency can help curtail wash trading, said Jefferies. Kim agreed that exchanges, even in non-regulated jurisdictions, can make use of market surveillance tools if they are serious about curbing wash trading.

In the interim, rating firms and others will have to continue to look beyond trading volumes as the sole metric in determining an exchange’s quality. “We will need to look at more metrics to get a more holistic view of the exchange,” said Ong, whose firm has added factors such as order-book depth, bid-ask spread, web traffic estimates, API quality and cybersecurity practices to its “Trust Score” rating algorithm.

In sum, the problem of wash trading is not likely to be remedied overnight. This market malpractice is a “regulatory problem and not a data-related problem,” as Chee told Cointelegraph, but the market is decentralized and most exchanges exist outside a regulator’s reach, so moral suasion and community pressure can only work up to a point. In the end, a regulator’s stick — as recently seen in Canada — may be the only way to totally eliminate wash trading. “If you fear your right to operate will be imperiled, you won’t lie about trading volume,” said Kim.