There is “too much money to spend,” and this will help Bitcoin (BTC) reach its next phase of huge price increases, analysts believe.

“Too much money to spend”

Velocity measures the speed at which money moves around the economy, and 2020 has seen a crash in the metric.

“While the sudden economic stop obviously resulted in much lower economic activity, the sharp decline also suggests there is just too much money to spend. A quick look at central bank balance sheets confirms this.”

The huge money printing activities by the Federal Reserve alone have characterized the period since March, when coronavirus sparked a cross-asset market crash. 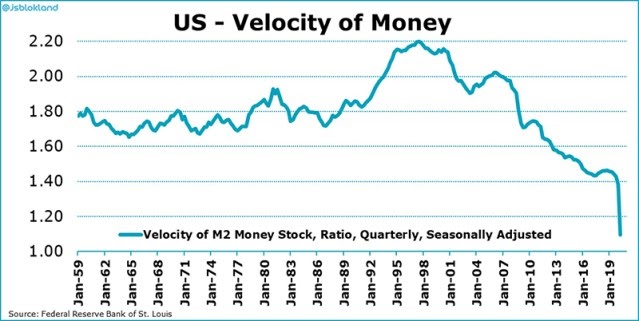 For PlanB, the quant analyst behind Bitcoin’s stock-to-flow price forecasting models, the collapse in money velocity will only serve to speed the largest cryptocurrency on its way to recent predictions — an average of $288,000 by 2024.

The stock-to-flow cross-asset model (S2FX) delivers multiple “phases” of Bitcoin as an asset, and the $288,000 price point forms part of phase five.

Meanwhile, Blokland warned about the impact of low velocity on financial policy. This week, the Fed is widely tipped to announce plans to raise its inflation target to up to 4%.

“The low velocity of money also means that even more money is needed to create inflation. So far, however, this has only resulted in asset price inflation,” he added.