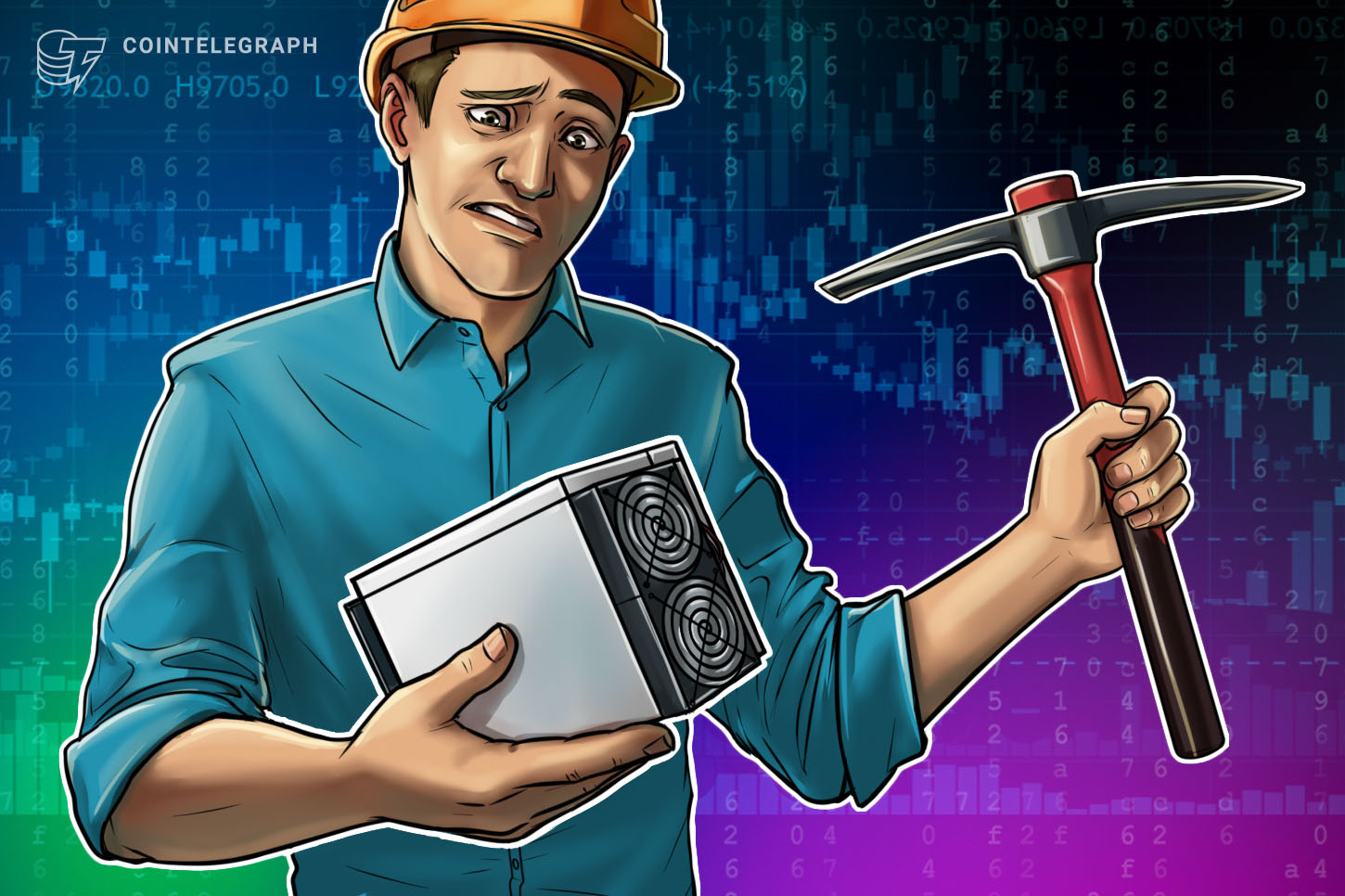 The Antminer T19 announcement comes amid the post-halving uncertainty and follows the company’s recent problems with its S17 units. So, can this new machine help Bitmain to reinforce its somewhat hobbled position in the mining sector?

According to the official announcement, the Antminer T19 features a mining speed of 84 TH/s and a power efficiency of 37.5 joules per TH. The chips used in the new device are the same as those equipped in the Antminer S19 and S19 Pro, though it uses the new APW12 version of the power supply system that allows the device to start up faster.

Bitmain usually markets its Antminer T devices as the most cost-effective ones, while the S-series models are presented as the top of the line in terms of productivity for their respective generation, Johnson Xu — the head of research and analytics at Tokensight — explained to Cointelegraph. According to data from F2Pool, one of the largest Bitcoin mining pools, Antminer T19s can generate $3.97 of profit each day, while Antminer S19s and Antminer S19 Pros can earn $4.86 and $6.24, respectively, based on an average electricity cost of $0.05 per kilowatt-hour.

Antminer T19s, which consume 3,150 watts, are being sold for $1,749 per unit. Antminer S19 machines, on the other hand, cost $1,785 and consume 3,250 watts. Antminer S19 Pro devices, the most efficient of three, are considerably more expensive and go for $2,407. The reason Bitmain is producing another model for the 19 series is due to what is known as “binning” chips, Marc Fresa — the founder of mining firmware company Asic.to — explained to Cointelegraph:

“When chips are designed they are meant to achieve specific performance levels. Chips that fail to hit their target numbers, such as not achieving the power standards or their thermal output, are often ‘Binned.’ Instead of throwing these chips in the garbage bin, these chips are resold into another unit with a lower performance level. In the case of Bitmain S19 chips that don’t make the cutoff are then sold in the T19 for cheaper since they do not perform as well as the counterpart.”

The rollout of a new model “has nothing to do with the fact that machines are not selling well,” Fresa went on to argue, citing the post-halving uncertainty: “The biggest reason machines probably are not selling as well as manufacturers would like is because we are on a bit of a tipping point; The halving just happened, the price can go anyway and the difficulty is continuing to drop.” Product diversification is a common strategy for mining hardware producers, given that customers tend to aim for different specifications, Kristy-Leigh Minehan, a consultant and the former chief technology officer of Genesis Mining, told Cointelegraph:

“ASICs don’t really allow for one model as consumers expect a certain performance level from a machine, and unfortunately silicon is not a perfect process — many times you’ll get a batch that performs better or worse than projected due to the nature of the materials. Thus, you end up with 5–10 different model numbers.”

It is not yet clear how efficient the 19-series devices are because they have not shipped at scale, as Leo Zhang, the founder of Anicca Research, summed up in a conversation with Cointelegraph. The first batch of S19 units reportedly shipped out around May 12, while the T19 shipments will start between June 21 and June 30. It is also worth noting that, at this time, Bitmain only sells up to two T19 miners per user “to prevent hoarding.”

The latest generation of Bitmain ASICs follows the release of the S17 units, which have received mostly mixed-to-negative reviews in the community. In early May, Arseniy Grusha, the co-founder of crypto consulting and mining firm Wattum, created a Telegram group for consumers unsatisfied with the S17 units they purchased from Bitmain. As Grusha explained to Cointelegraph at the time, out of the 420 Antminer S17+ devices his company bought, roughly 30%, or around 130 machines, turned out to be bad units.

Similarly, Samson Mow, the chief strategy officer of blockchain infrastructure firm Blockstream, tweeted earlier in April that Bitmain customers have a 20%–30% failure rate with Antminer S17 and T17 units. “The Antminer 17 series is generally considered not great,” added Zhang. He additionally noted that Chinese hardware company and competitor Micro BT has been stepping on Bitmain’s toes lately with the release of its highly productive M30 series, which prompted Bitmain to step up its efforts:

“Whatsminer gained significant market share in the past two years. According to their COO, in 2019 MicroBT sold ~35% of the network hashrate. Needless to say Bitmain is under a lot of pressure both from competitors and internal politics. They have been working on the 19 series for a while. The specs and price look very attractive.”

Minehan confirmed that MicroBT has been gaining traction on the market, but refrained from saying that Bitmain is losing market share as a result: “I think MicroBT is offering option and bringing in new participants, and giving farms a choice. Most farms will have both Bitmain and MicroBT side by side, rather than exclusively host one manufacturer.”

“I would say that MicroBT has taken up the existing market share that Canaan has left,” she added, referring to another China-based mining player that recently reported a net loss of $5.6 million in the first quarter of 2020 and cut the price of its mining hardware by up to 50%.

Indeed, some large-scale operations seem to be diversifying their equipment with MicroBT units. Earlier this week, United States mining firm Marathon Patent Group announced that it had installed 700 Whatsminer M30S+ ASICs produced by MicroBT. However, it is also reportedly waiting for a delivery of 1,160 Antminer S19 Pro units produced by Bitmain, meaning that it also remains loyal to the current market leader.

Will the hash rate be affected?

Bitcoin’s hash rate plummeted 30% soon after the halving occurred as much of the older generation equipment became unprofitable due to the increased mining difficulty. That spurred miners to reshuffle, upgrading their current rigs and selling older machines to places where electricity is cheaper — meaning that some of them had to temporarily unplug.

The situation has stabilized since, with the hash rate fluctuating around 100 TH/s for the past few days. Some experts attribute that to the start of the wet season in Sichuan, a southwest Chinese province where miners take advantage of low hydroelectricity prices between May and October.

Related: Sichuan Rainy Season to Give Bitcoin Hash Rate a Much Needed Jolt

The arrival of the new generation of ASICs is expected to drive the hash rate even higher, at least once upgraded units become widely available. So, will the newly revealed T19 model make any impact on the state of the network?

Experts agree that it won’t affect the hash rate to a major degree, as it’s a lower output model compared with the S19 series and MicroBT’s M30 series. Minehan said she doesn’t expect the T19 model “to have a huge impact that’s an immediate cause of concern,” as “most likely this is a run of <3500 units of a particular bin quality.” Similarly, Mark D’Aria, the CEO of crypto consulting firm Bitpro, told Cointelegraph:

“There isn’t a strong reason to expect the new model to significantly affect the hashrate. It might be a slightly more compelling option to a miner with extraordinarily inexpensive electricity, but otherwise they likely would have just purchased an S19 instead.”

At the end of the day, manufacturers are always in an arms race, and mining machines are simply commodity products, Zhang argued in a conversation with Cointelegraph:

“Besides price, performance, and failure rate, there are not many factors that can help a manufacturer differentiate from the others. The relentless competition led to where we are today.”

According to Zhang, as the iteration rate naturally slows down in the future, there will be more facilities using “creative thermal design such as immersion cooling,” hoping to maximize the mining efficiency beyond just using most powerful machines.

As for now, Bitmain remains the leader of the mining race, despite having to deal with the largely defunct 17 series and an intensifying power struggle between its two co-founders, Jihan Wu and Micree Zhan, which recently resulted in reports of a street brawl.

“Due to its recent internal issues, Bitmain is facing challenges to keep its strong position in the future thus they started to look at other things to expand its industry influences,” Xu told Cointelegraph. He added that Bitmain “will still dominate the industry position in the near future due to its network effect,” although its current problems might allow competitors such as MicroBT to catch up.

Earlier this week, the power struggle inside Bitmain intensified even further as Micree Zhan, an ousted executive of the mining titan, reportedly led a group of private guards to overtake the company’s office in Beijing.

Meanwhile, Bitmain continues to expand its operations. Last week, the mining company revealed it was extending its “Ant Training Academy” certification program to North America, with the first courses set to launch in the fall. As such, Bitmain seems to be doubling down on the U.S.-based mining sector, which has been growing recently. The Beijing-based company already operates what it classifies as “the world’s largest” mining facility in Rockdale, Texas, which has a planned capacity of 50 megawatts that can later be expanded to 300 megawatts.