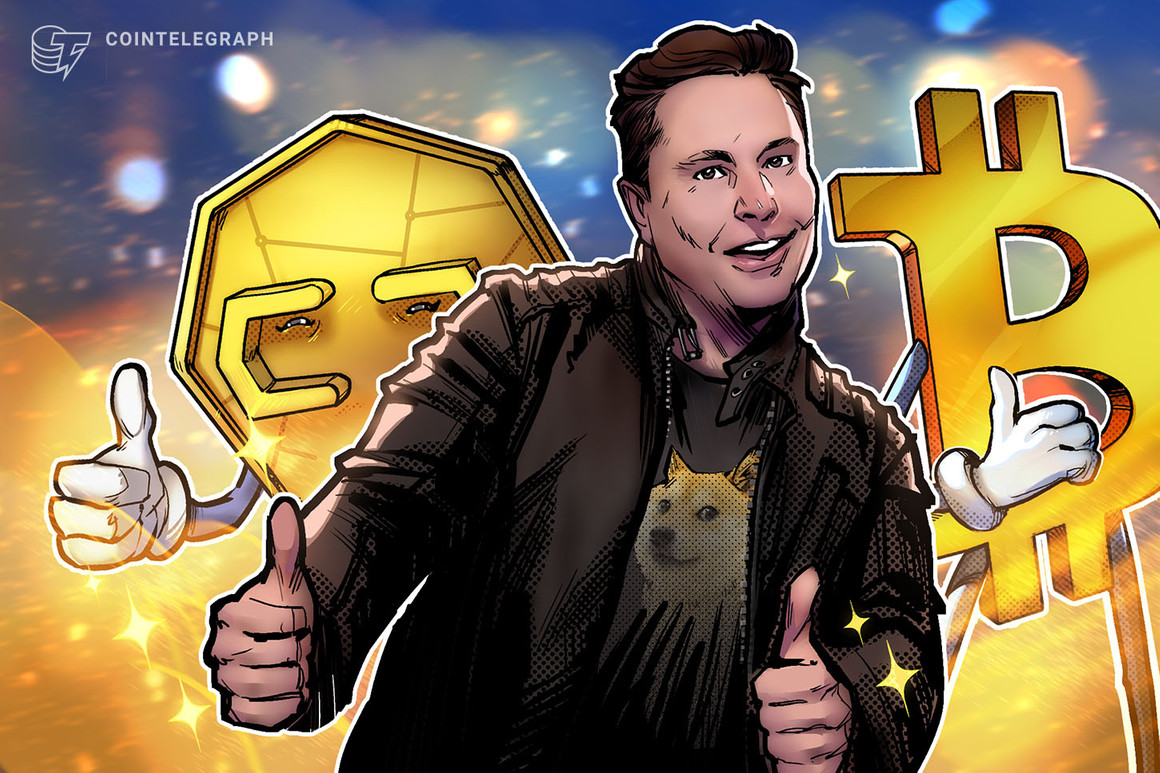 A growing number of business leaders and celebrities — e.g., Elon Musk, Jack Dorsey, Alex Ohanian and, most recently, Ricardo Salinas — have added the Bitcoin hashtag to their Twitter biographies. It hasn’t gone unnoticed. When Elon Musk added #Bitcoin to his bio in late January, Bitcoin soared by 20%.

If indeed a succession of billionaires and tech moguls have taken the Bitcoin pledge — whatever that might entail — what is their motivation? Are they trying to manipulate the market, for instance — or promote their brand?

Could they be just looking to pull the collective leg of crypto’s true believers? The CEOs, on the other hand, could be deadly earnest: signaling the technological future they believe is coming to pass — e.g., global and decentralized.

Whatever the reason, it seems fair to say that social media has been tilting Bitcoin’s (BTC) value proposition recently, and it raises some questions. For example, are cryptocurrencies more susceptible to social media messaging than other financial assets?

BTC and social media — Joined at the hip?

Rightly or wrongly, many users judge BTC’s success by its daily market price, and that price seems more entangled than ever with social media activity.

“Absolutely,” Feng Mai, an assistant professor at Stevens Institute of Technology’s School of Business, commented to Cointelegraph. “My research has shown that Twitter posts from influencers have an immediate effect on BTC pricing.” This is for two reasons, Mai explained: “Its lack of intrinsic value compared to other financial assets, and its adopters’ demographics overlapping with social media users.”

Neil Wilson, chief market analyst for Markets.com trading, added that cryptocurrencies — like some other assets that occupy relatively small pockets within the overall investing market, e.g., GameStop — seem particularly vulnerable to social media because they are relatively illiquid with large holdings in the hands of comparatively few people, and also because they have “a crowd/cult following.”

Finn Brunton, professor of science and technology studies at the University of California, Davis and author of Digital Cash: The Unknown History of the Anarchists, Utopians, and Technologists Who Created Cryptocurrency, told Cointelegraph BTC and social media have been intertwined since Bitcoin’s origins.

According to him, “Bitcoin has always been a social media movement first and a working currency second — driven by testimonials, stunts, memes and exhortations to HODL and believe.” In that sense, the price of BTC skyrocketing because a voguish CEO modifies their Twitter bio “is completely on brand.”

Is celebrity attention good for BTC?

On the face of it, the timely addition of #Bitcoin to the Twitter bios of tech CEOs, such as Dorsey, Ohanian and Musk, would seem to be a plus, garnering more attention for Bitcoin and eventually increasing acceptance and adoption. Wilson told Cointelegraph:

“Musk and Tesla embracing Bitcoin is good news for the cryptocurrency,” Mai added, “in that it lends credence to cryptocurrency as a medium of exchange, which is one of the key functions of money according to economists.”

But don’t these social-media turbo charges also make BTC’s price more erratic — with volatility long being cited as one of the cryptocurrency’s main drawbacks? When billionaire Salinas, Mexico’s third-wealthiest man, added #Bitcoin to his Twitter bio at the start of February, for instance, the price of the top crypto asset surged over $40,000 for the first time in 23 days.

Mai answered that the entry of large firms like Tesla more than offsets any short-term volatility, and the large corporations will make Bitcoin less volatile: “The firms that accept BTC should now have more incentive to stabilize the value of BTC — they do not want their revenue fluctuating significantly day-to-day.”

Regarding the recent hash-tagged bios, Brunton, not exactly a BTC bull, commented: “It’s good for Bitcoin in that more buy-in from rich guys equals more parties invested in keeping this leaky raft afloat.” In his view, a better long-term outcome, however, would be for users to migrate from BTC to cryptos “that work better, are better engineered, or have superior implementation.” Bitcoin, he added, “is the alpha rollout of what cryptos could be, so the more sunk cost there is, the longer we’ll be stuck with it.”

Not just a Musk whim?

When Elon Musk added #Bitcoin to his Twitter bio on Jan. 29, the effect on BTC was flammable — the price rallied 14% in the first 30 minutes. But not all followers were entirely clear about the world’s richest man’s intent. Was he just joshing with his 43 million Twitter followers? The addition of a cryptic tweet — “In retrospect, it was inevitable” — only deepened the ambiguity.

The picture became clearer, however, on Feb. 8 when it was widely reported that Tesla had recently purchased $1.5 billion of Bitcoin, which is yet to be revealed. Obviously, Musk’s interest in BTC had been genuine. Musk has since removed #Bitcoin from his Twitter bio. Wilson told Cointelegraph:

“Now we know not only is Musk on side but Tesla is backing on a corporate level — the strategy was approved by the board and audit committee. This is important since it is not just a Musk whim but a ‘serious’ corporate investment.”

Brunton was less tolerant of Musk, whom he called an “A-1 s—poster who also happens to be a billionaire.” That said, according to him, “#bitcoin is definitely part of the Reddit-style starter pack of tech-baron lifestyle trappings and displays. That’s about a culture and a scene, though. It has nothing to do with ‘technology’ as such.”

Elsewhere, it’s been suggested that Bitcoin-hash-tagging CEOs were just using social media to promote “their brand as a crypto-friendly firm and getting a ton of free publicity.” Neo, for his part, believes that markets are currently overextended, “and there are definitely revolters out there who are just tweeting for ‘fun’ at people’s expenses.” During such times, “it is even more crucial that we exercise caution, invest rationally and not emotionally,” he told Cointelegraph.

Meanwhile, Balaji Srinivasan, angel investor and co-founder of Coin Center — a nonprofit crypto policy advocate — in the past has suggested that Bitcoin is becoming the new “flag of technology” representing high-echelon economic values such as decentralization and internationalism.

So, is that what is going on with the #Bitcoin movement: CEOs just waving the new “flag of technology,” eager to identify themselves with a still coalescing decentralized future?

“It [BTC] is the flagship of all cryptocurrencies and represents the many values inherent in the technology,” answered Jay Hao, CEO of OKEx crypto exchange, though it often means different things to different people:

“It may represent freedom for one person, efficiency for another […] a life raft, a speculative asset, a store of value and so on. A person who has seen his life savings wiped out by hyperinflation and is using BTC as a means of shielding future wealth will see the flag of Bitcoin differently from a day trader or institutional investor.”

Wilson told Cointelegraph: “I think Bitcoin has always been a movement to an extent — it’s about decentralization and ‘taking back control’ from central banks, governments, etc.” Dallas Mavericks owner Mark Cuban went even further, telling Forbes in December that Bitcoin is “more religion than solution to any problem.”

A social movement with shared high-level beliefs? Brunton remained skeptical: “Bitcoin is — and has always been — multiple conflicting social movements awkwardly kludged together around a currency and a transaction infrastructure.” He further added that beliefs around what Bitcoin is are different for people like speculators, libertarians, anti-statists and so on, concluding: “To say that anyone holds common beliefs by holding BTC is a category error.”

Neo told Cointelegraph: “Flag or not, to the masses out there, it isn’t just a matter of investment but also a statement that they support the particular ecosystem or an asset.”

On the journey to mass adoption

Whatever the explanation behind the proliferation of #Bitcoin in Twitter bios, most Bitcoinists are probably encouraged by it, while acknowledging that it remains a sideshow at best.

As Hao told Cointelegraph, BTC “has been gaining traction steadily over the years — long before leading business executives arrived ‘late to the party.’” The hashtags are a “nice gesture,” another sign that BTC is becoming a movement, but in the end, Hao added, this is just another step along the “journey to mass adoption.”